An Open Letter to Monarda 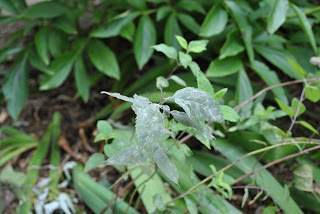 OK, Monarda fistulosa or wild bergamot, or whatever you like to call yourself, it's time for us to reach an understanding. You have one more year. That's right, one more year in which I promise to give you the attention and powdery mildew prevention you deserve, and in return you will give me blooms. Or else you're gone. 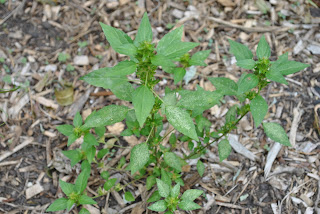 That goes for you too, new seedling from One Seed Chicago, which has grown so vigorously and unexpectedly well. Your effort has not gone unnoticed. Nor has the creeping whiteness on your leaves, which doesn't look quite like powdery mildew but might be something else, maybe even something more pernicious. 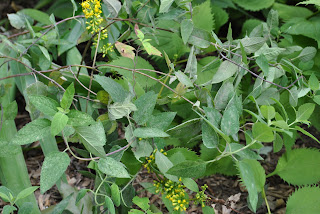 I'm just sick of it. I'm sick of the flopping, the engulfing mildew, and yet I admit that I myself am partly to blame. When I sprayed you regularly and repeatedly with a milk/water mixture, the progress of the mildew was stopped. But I didn't stay as vigilant as I should have, and for that I'm sorry. Many, many sojourns away from the garden this summer put you farther down the list of priorities, and once I knew that you would withhold your blooms again this year I lost my remaining motivation to keep up with the spraying.

So let's start fresh. Next spring, I will dutifully and regularly spray you with the milk mixture, and in return you will have flowers. Even little ones. It's only fair; it will officially be the "leap" year for your growth (of course not the actual leap year of having a February 29th, but your third year in the garden, having passed the "sleep" and "creep" years). What do you say? Wouldn't it be better to stay amongst the goldenrods and asters and even the irises nearby, as opposed to an ignominious end in the garbage? (Because of course you can't be composted with all that powdery mildew!)

So it's a deal. One more year, with mutual attention paid. In honor of this, my 100th post, it just seems fair.
Posted by Ramble on Rose at 4:04 PM

If I were you Monarda, I'd heed the warning. Sounds like she means business!

Congratulations on writing 100 posts. It's quite a milestone.
I say yank the stupid Monarda anyway. There are some good cultivars that don't need all that fussing. I know it's not the same as growing the species, but in a small yard, there just isn't room to hide the imperfections.

That's the way to tell them! I tend to agree with MMD~Go for another one. Have you tried Monarda bradburiana~it survived~without extra watering in our horrific heat and humidity. It's an IL native and is growing in the Lurie. gail