Prairie Nursery Gets It 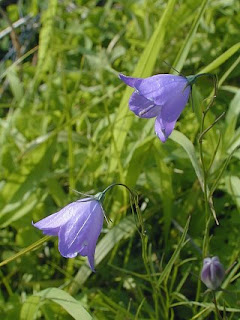 Aren't you tired of all the hand-wringing about how companies can "effectively market themselves" in today's economy? Maybe you're not tired of that, but I feel like I hear this all the time, particularly with nurseries and companies in the general horticulture industry. How to utilize social media? How to engage a new generation of gardeners? Should companies sell pre-packaged, paint-by-numbers gardens for us lazy, technology-addled Generation Y customers? I don't claim to have the answers, but I can say that Prairie Nursery of Westfield, WI, got it right with a simple yet effective technique to get me buying plants.

And here it is: They're having bi-weekly sales that they're advertising through email, listing only two plants in each email along with their characteristics and growing requirements. These said emails come only once every couple weeks, not in a daily inbox-clogging barrage like some companies (Horticulture, I'm looking at you!!). The information is to-the-point and helpful. Sure enough, I read one recently and thought, "You know what? Campanula rotundifolia does sound like it will thrive in my north border. And it's on sale!"

Would this work with new gardeners? Maybe, maybe not. I've bought plants from Prairie Nursery before, hence how I came to be on their electronic mailing list. Also I know my site conditions well and was planning on buying plants for this border anyway. Maybe I'm just a sucker for sales and that explains it. But it seems to me this is a simple way to engage gardeners without elaborate campaigns. "Hey gardener, here's a cheap plant that grows in setting XYZ." There, was that so hard?

Please note that I am just a regular 'ole customer of Prairie Nursery. I did not receive any request or inducement to talk about them, and I paid for the Campanulas with my own money. And the photo is a shot of C. rotundifolia from the fabulous native plant website, Illinois Wildflowers, which contains botanical info for plants that range beyond just Illinois, I might add.
Posted by Ramble on Rose at 11:31 AM 4 comments: 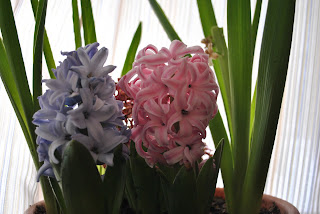 These hyacinths will soon be on their last legs, but they're still perfuming the air around my desk and reminding me that, yes, spring will eventually be here. This year I forced 'Pink Pearl' and 'Delft Blue' (which you see here) and 'L'Innocence,' a white variety that has unfortunately finished blooming already. They were termed "best early forcers" by John Scheepers bulbs, and I have to say they did bloom early. A little too early, thanks to my impatience. I found 'L'Innocence' to be very powerfully fragrant, and I plan to grow it again next spring, maybe with some 'Blue Jacket' or 'City of Haarlem.' 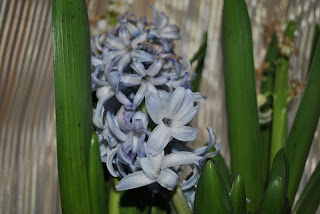 Our moderating temperatures are melting the mountains of snow and, even though I know it's just a short-lived tease, they signal that one day (relatively) soon there will blooms in the garden to share! 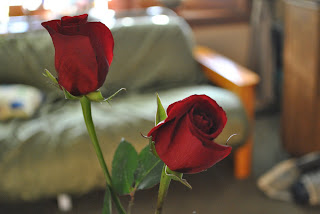 And I have some lovely Valentine's Day flowers to enjoy too...always a nice touch!

Garden Blogger's Bloom Day is hosted by Carol of May Dreams Gardens. Stop by to see what's blooming everywhere!
Posted by Ramble on Rose at 6:06 AM 14 comments:

A Fungus Among Us

I have known something was wrong with my two night-blooming cereus for a few years. I saw the dried, shriveling leaves and dark foliar spots. I was painfully aware that they hadn't bloomed in well over a decade. (Yes, a decade!) But I convinced myself it was too much water, too little water, too much light, too little light; I refused to honestly size up the problem. And now my denial might cost me the plants entirely. 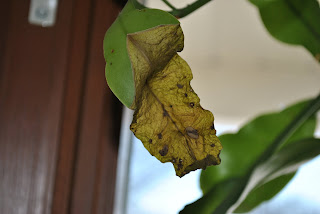 It's anthracnose. At least I'm fairly certain that's what is destroying the mother plant (a passalong from a very dear mentor who has since passed away) and the cutting I made from it. After some research in my books and online, I found the dark, depressed lesions and defoliation match uncannily with the pictures and descriptions of anthracnose, a group of fungal diseases that seem to typically affect deciduous trees and vegetables but that apparently go after poorly cared for houseplants too. 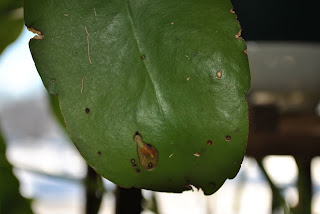 I blame myself not only for letting the infection get out of hand but for the shoddy care that let it get established in the first place. Irregular watering and too little air circulation allowed the plants to get stressed and hence left them vulnerable to this fungus. 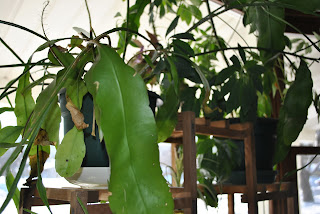 Now I'm left trying to root the handful of leaves that appear to be disease-free, while I must throw these beloved keepsake plants in the garbage (not even a dignified, circle-of-life burial in the compost!).

The pots, scissors and surrounding plants that were likely exposed to spores all need disinfecting. And after dithering for about two years, I will finally repot, divide, fertilize and care for my remaining houseplants! It is only now, in the harsh light of regret, that I can see how unhealthy they really are.
Posted by Ramble on Rose at 6:25 PM 4 comments:

My impatience got the best of me... 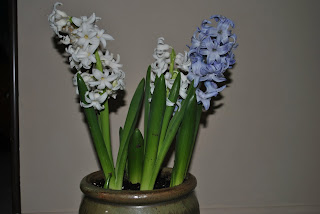 ...and these definitely needed a couple more weeks in the garage for some more stem growth... 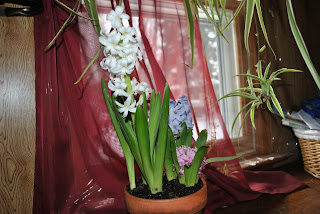 ...but the olfactory symphony from these hyacinths has made it feel almost like there's a tiny bit of spring here... 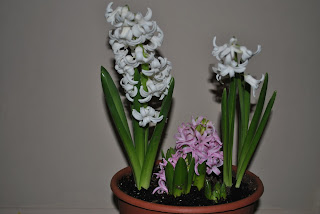 ...even when we've just gotten a foot of snow and bitter cold is bearing down on us. 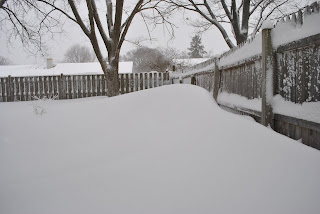 At least, for now, I have this. 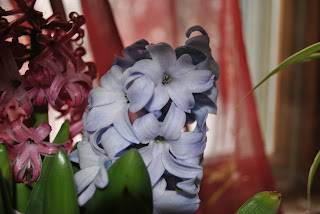