Lessons from the Vegetable Garden, Year 1

Gardening is a continual learning experience, which is part of what makes it fun, and as winter settles in I am mulling over what I've learned from my first year of growing a full-on vegetable garden, though small it may be. 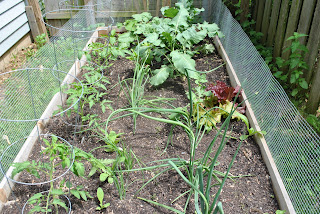 Of course every year is different so what was a success one summer can be a failure the next (just look at the difference in tomato conditions from the late blight of dreary 2009 to the parched heat of 2010). But, there are a few things I've taken away that I think will transcend the fickleness of weather.

1. Mulch, stupid!
I've been over this before, so I won't rehash it here. I have taken Garden Girl's advice about leaf mold for mulch and have a nice, thick blanket of shredded leaves on the veggie bed as we speak. Whether it's this or straw or grass clippings, there will be mulch next year.

2. Start some vegetables from seed.
Maybe that seems obvious to others, but I was concerned about lanky, weak seedlings thanks to my humble set-up and lack of a place for proper grow lights. So I direct sowed everything (except the peppers and tomatoes which were purchased beyond the seedling phase). Overall, this was a success. But I read an illuminating post by Michele on Garden Rant concerning broccoli. Her post actually concerns all crucifers (cabbage et al.), and ironically her epiphany was the opposite of mine, or rather to direct sow her broccoli.

But the reason I say this was illuminating was that this post made me realize my broccoli was bolting, which was not something I ever thought of broccoli doing. Lettuce, spinach, cilantro, sure, these plants bolt and I know how to deal with it. But I was stumped by my lovely broccoli heads inexplicably blooming with yellow flowers just a day or two before I intended to harvest them. The broccoli was probably the most popular veggie grown here this year and I intend to increase it next year. So what to do about the flowering, which of course is the same as any other plant bolting (i.e., flowering and becoming inedible due to summer heat)?

Michele's post highlighted the problem of broccoli reaching maturity in the heat of midsummer. So the obvious solution is to not have the broccoli plants reaching maturity at that time. Instead, I will start seedlings indoors so that they reach maturity in June or by early July, hopefully before the real dog days set in, while also continuing to direct sow seeds around Memorial Day or 4th of July so that the second batch reaches maturity after the heat of August. See, this is why it's great to read garden blogs...

3. Grow fewer things.
That may sound strange but with my compressed space it's a must. I need to grow fewer things better rather than many things poorly. Just as I am trying to grow more broccoli (big hit with me and the whole family, have good ideas on how to improve), I need to cut back on squashes and not just because they were a total failure this year (which they were) but because they take up too much space if I'm to grow more broccoli. Both those types of plants need space, so prioritize I must. 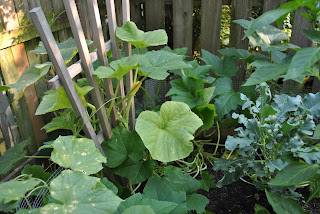 (Squashes and broccoli duke it out)

Similarly, I know I want more peppers and tomatoes but things need to be moved around so the peppers get more sunlight than they did this year. So things like onions will probably lose out (except for green onions which I can probably squeeze in). That small space has proven it's productive beyond its stature, but there's only so much I can ask of one 9'x3' rectangle.

4. Use better tomato cages.
I skimped last year thanks to budgetary and time concerns. At my favorite local garden center the only tomato cages in the whole place were those cone-shaped ones you always see--exactly the kind my mom warned me against. And while I knew she was right and said as much, I was too cheap and hurried to order good ones online or try another store, so I grabbed the flimsy cones and regretted it from June onward. No more! Decent, sturdy, square-shaped tomato cages will be worth the slight extra cost, and now I know to get them in advance of mid-May, when my seedlings are sitting there and I'm feeling pressed for time. 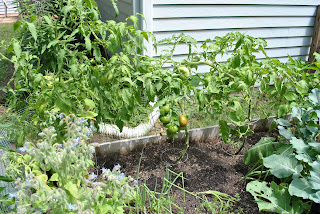 (Tomato cages being overwhelmed, and this was not the worst of it)

So what did you learn in your garden this year (vegetable or otherwise)? What else should I know that I've not mentioned here?
Posted by Ramble on Rose at 11:40 AM 6 comments:

(the remnants of) Wildflower Wednesday

It is officially cold here. I hesitate to say it's officially winter because of course it is not, but it feels like it now, with temperatures having plunged to the 20s in the last couple days. 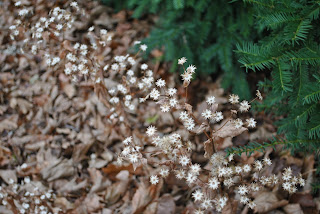 Not surprisingly the wildflowers are gone but the remnants of many of them are here, still looking textural, and likely to be even more so once it snows. 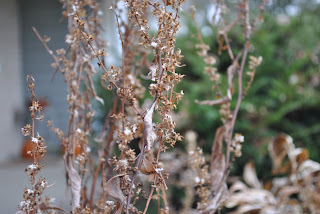 The goldenrods have great seedheads, I think. Above is the spiky, almost barbed-looking seedheads of zig-zag goldenrod (Solidago flexicaulis)... 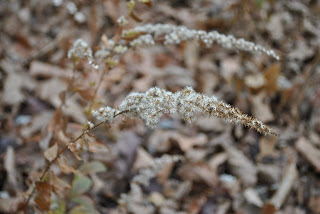 ...and here is my new favorite, elm-leaved goldenrod (S. ulmifolia), which are retaining their drooping, shooting-star-like habit but now with fuzzy seeds. 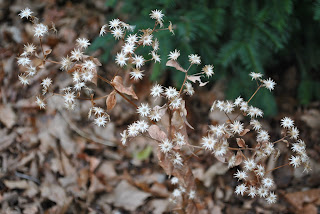 Big-leaved asters (Eurybia macrophylla) are nearly as exuberant as they were with actual blooms. 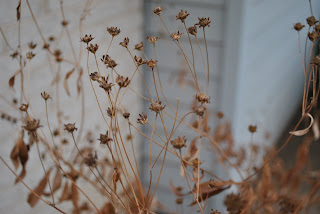 The tall coreopsis (C. tripteris) lived up to its name this year; it's nearly five feet high! Its spent foliage and flowerheads are towering over the spent asters, zizias, pale purple coneflowers and sedums below (which are mostly covered by leaves at this point).

Leaving the seeds and spent foliage is of course good for any birds and other wildlife looking for food and shelter throughout our cold Midwestern winters. And it provides me with something to look at other than the hated (but grudgingly admitted, useful in winter) yew bushes. For more wildflowers this Wednesday, including some that are probably still blooming, visit Gail at Clay and Limestone. Happy Thanksgiving, everyone!
Posted by Ramble on Rose at 6:09 AM 5 comments:

Bloom Day: In defense of a mum 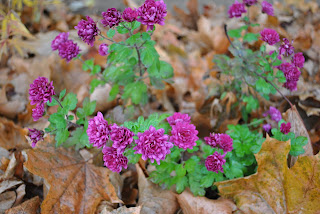 Like many gardeners, I'm not a big fan of mums. I really can't stand them as rounded, fuzzy meatball-like monocultures in garish shades of yellow and orange found seemingly at every site of public landscaping and too many home gardens as well. But a few years back when my garden was little more than a few new native forbs, I succumbed to the temptation of buying a couple late-season mums. They were in fuschia and purple, and one promptly died with the frost. But the other has held on, and even in its mostly shady location, it blooms in rich purple, with ray-like stems that are anything but rounded and meatball-esque. 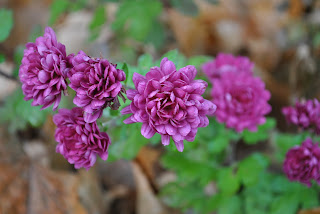 I'm considering moving it to a sunnier spot near the purple sedums I planted this year (if they survived, that is). Maybe I'm withholding my disdain because there's just one, but this mum is an exception to prove the rule and it's welcome here, especially since it's the only thing blooming this year in November.

To see what else is blooming in gardens all over the world, visit Carol at May Dreams Garden.
Posted by Ramble on Rose at 11:11 AM 5 comments:

The trouble with overwintering

...is that sometimes the plants can't handle it! 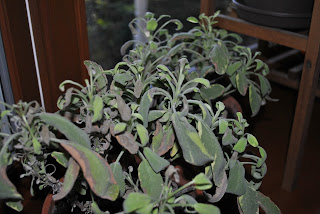 I decided to overwinter my three 'La Crema' sages from Hort Courture because I really liked their variegated foliage in shades of deep green and light lime. They thrived in the heat and drought and complemented the rest of my salvias quite well. I'd like to divide these next spring and use them to cover the bare ankles of my 'David' phloxes in the front border, but will they make it through the winter?? I fully expected many dropped leaves and some stress as they went from the very bright sun of the garden to the much-less-sunny front window, so I gave them a good two weeks in their pots sitting on the patio to help with the adjustment. So much for that idea. They've been shedding leaves left and right, plus new growth is shriveling on one of them. 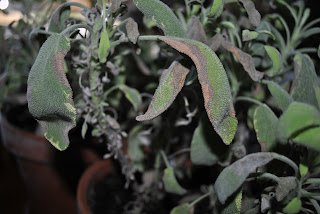 In my care to not overwater them I think I may have let them dry out too much (possibly contributing to all those shriveled, dropped leaves), but now I find myself in the typical conundrum of "am I killing them with too much or too little? Should I water or let them dry out?!" 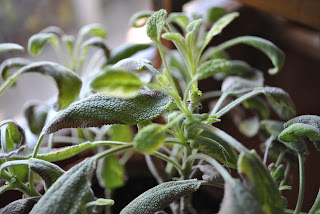 All is not lost, of course, There is minimal new growth on all three plants, and I still have recourse to more drastic measures such as taking cuttings and rooting them in water. And if all else fails, hey, they were free so it's not the end of the world. But this is why overwintering is so challenging! Especially after getting spoiled last year by the world's best, easiest, most gardener-friendly coleus.

How do you get your tender perennials/annuals through the winter?

Disclaimer: Yes, I received these plants as a free trial. And a trial they are right now!
Posted by Ramble on Rose at 10:17 AM 7 comments: