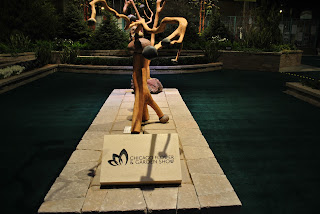 Last weekend I journeyed to the Chicago Flower & Garden Show, which runs through March 14 at Navy Pier, with Mr. McGregor's Daughter (whose comprehensive review is here). Although I frequently miss out on all kinds of garden-related events around Chicagoland thanks to schedules, distance, and general life craziness, this is one that I manage to make it to just about every year. And so it was in 2010 as well!

I can't say that a lot of the gardens really "wowed" me; I guess I'm not that big of a theater fan. The theme this year was "Cultivating Great Performances," which I think is cute since Chicago really does have a vibrant theater and performing arts scene. But only a few of the display gardens really incorporated that theme in an expert and clever way, and to be honest my favorite garden didn't have any theater relation at all. 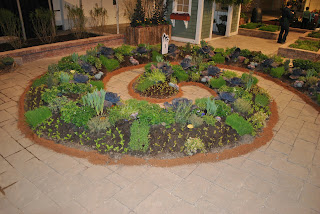 I'll jump right into my favorite: Spring Awakening. This potager garden did a fabulous job of mixing edibles and ornamentals and also making those edibles function as ornamentals. The geometry that is integral to potager design was literally molded into not just the traditional squares but also a winding curlicue shape. 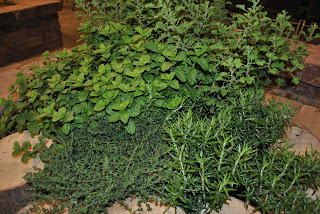 The large clumps of herbs smelled absolutely divine. I sat with my head buried in this one for a good three minutes. There's (clockwise from top left) spearmint, lemon balm (I'm pretty sure), rosemary, and creeping thyme. 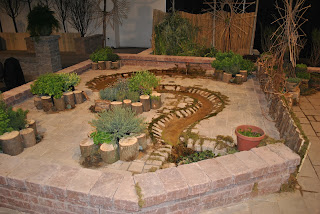 My favorite combination from this garden (as you can see from my header photo) was the roses and kale. 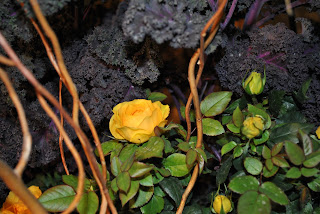 I love the yellow and purple color combination, plus the crinkly-ness of the kale made the perfect backdrop for the silky rose petals and leaves. What surprised me the most was how much I liked this garden. I am usually not a huge fan of potager. Don't get me wrong, it has it's charm, but when I think of my favorite garden styles potager does not jump to the front of my mind. This example, however, was inventive and attractive, not to mention tasty and scented. It really appealed to all five senses, which is one of the ultimate achievements of a garden, I think.

OK, moving on. "Alice's Wonderland" probably did the best job of applying the show's theme. I have to admit that I was a little creeped out by the Queen of Hearts... 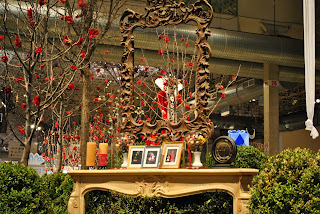 ...and in general this type of fantasy-related design is not my thing. But, it did result in a garden that was truly based on Lewis Carroll's works. I think the fact that there is a new Tim Burton movie of Alice in Wonderland happens to be a coincidence, but a lucky one for the show, definitely. Plus I liked the crushed glass pathway. 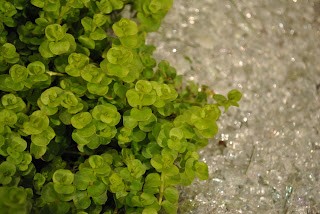 The Conservatory Garden was just that--a replica of a conservatory. It featured four seasons of themes, such as a Christmas section and a tropical section, and while it definitely had some beautiful plants, like dew-soaked fritillarias.... 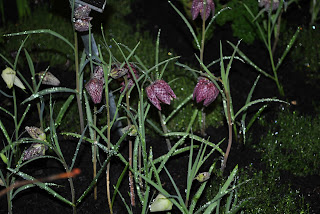 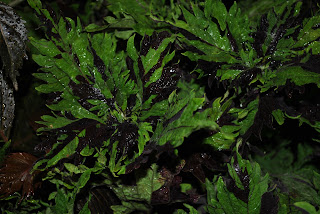 ...and a beautiful lady-slipper orchid... 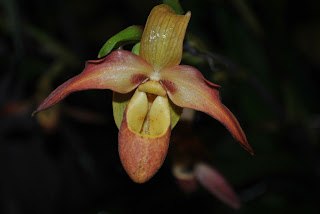 ...in the end it was like a conservatory and was basically just eye candy. 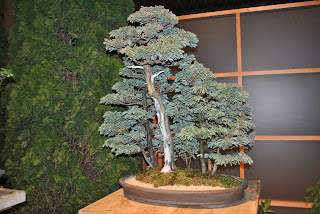 The bonsai exhibit by the Chicago Botanic Garden was cool because it was very different from everything else. 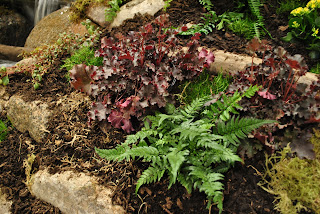 And the ferns and heucheras reminded me of my own dry shade garden. (I don't even remember which display these came from, I think Miss Saigon??)

I must also mention that there was a prairie restoration exhibit entitled "Jekyll and Hyde," which is a clever play on the evil buckthorn- and garlic mustard-filled degraded landscape and the sweet and healthy restored prairie landscape. Like restoration work itself, this vignette was educational and honorable but not splashy and eye-catching, and I inexplicably took no pictures of it. That's pretty lame coming from someone who purports to be a native plant nerd and resident of the Prairie State. Feel free to boo.

There is one more thing I discovered at this show that wasn't actually a plant. It's the Seed Keeper Kit, which is a storage system for seed packs. I'm really sorry I don't have a picture, so I encourage you to check it out on the website. I thought this was just ingenious, particularly as someone who has tons of seed packets crammed into a bowl in my living room. And it's not just a tupperware container with dividers; it has gloves, bags, plant markers, a ruler and more to help with seed organization and planting. Plus, the creators and company owners, Kerri and Carol, were as friendly and enthusiastic as could be. You've got to respect it when people find a need being unmet and take action to be entrepreneurs!

So in short I enjoyed the show and left with a new-found appreciation for potagers, even if the entire event didn't blow me out of the water. By the time we left in mid-afternoon the place was packed, and I was glad for two reasons: one, that so many people were turning out for a garden event and, two, that we had an opportunity to explore before the masses got there!

How did I miss the Rose/kale combo? I think I was drunk on cabbages.

Nice photos Rose! I didn't spend a lot of time on the show floor on Sunday - it was so crowded I mostly stuck to the seminars. Sorry I missed you!

I never made it into the conservatory garden because the line was so long! Will hopefully see it later in the week. I liked the prairie restoration very much but the theater theme was kind of a stretch. I loved the potager and also the "Our Town" garden but many of the gardens seemed to lack color as compared to past years.

I told MMD that our little Lawn and Garden Show never compares to these big city shows;-) I love seeing all the plants and they are good for the spirit. But most of the gardens are really over the top! The Prairie Restoration garden sounds cool...gail

Rose, I so agree with with most of what you say. Although I did enjoy just being there amoung all the gardens and flowers. More gardens than last year, but smaller, they had more veggies used as backdrops and accents and I found that interesting. Rose and I loved the purple kale that had been left to flower, but we missed the seed keeper! will check out their website.

I think that spiral potager was really pretty. You all are so lucky to have such interesting garden related things to go to! (Ah, just saw that Gail echoed the same sentiments!)

Rose, I'm selfishly glad you didn't post a photo of the prairie area, because I was going to:) And thanks for identifying that kale! I thought that's what it was, but I've never seen it grow that tall before and flower--I thought it was really an eye-catching plant.

Beckie and I rushed through the vendor area in order to get home earlier and unfortunately missed the seed-keeper vendor. I'll have to check that out.

It's fun seeing all the different photos and reading the different reactions to the show. I enjoyed it, but frankly I thought last year's was better.

Before addressing individual comments, I should explain that the Seed Keeper Kit was not displayed at the Marketplace; I met the owners at the Garden Writers Association regional meeting that was taking place that day. They were meeting with us and giving everyone a sneak peek at their product. I should have specified that!

MMD--How did you miss that? It was near the back of the display by the potting shed, along the "wall".

GG--I was on the look-out for you on Saturday! Sorry we missed each other!

Diane--The line for that garden was ridiculous. Had I waited that long to see it I would have been really aggravated when finding out it was an exact replica of a conservatory.

Gail--The restoration was cool, and I'm sorry again I didn't have a picture!

Beckie--I liked the use of edibles too. It's not necessarily easy to do it well, but there were many instances here where designers did that.

Jean--Thank you! We are definitely lucky that Chicago has so many garden activities.

Rose--I agree that last year's show was, on the whole, better than this year. But yes that kale was gorgeous! And I'm glad you got pictures of the restoration, and I can't wait to see them! Now I don't feel so bad about my omission!

I really enjoyed your photos of the Chicago Flower and Garden Show.
I didn't make it this year but it looks like you highighted all of the interesting areas.

Great review Rose. Sorry I missed you as well. I was only able to attend the Friday preview.

Oh! Those flowers caught my attention. It seems you have a great flower gardens. How I wish I could have a cool garden like yours. Keep it up!

Flowers are a part of our lives. We are welcome in this life by flowers, celebrate the most important moments with flowers and we retire surrounded by them. In the vase or pot, in the bouquet or arrangement, in our places, garden or parks, the flowers give an emotion, are a reason for us to be happy, melancholy, pleased, content or full of respect. One thing is for sure, the flowers are the sincere messengers of our feelings.